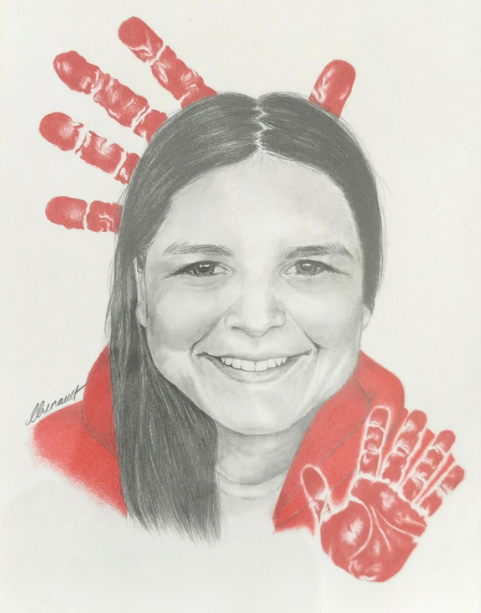 Ashley Nicole Morin was a quiet and friendly woman, with a broad smile that could quickly put you at ease. She was a hard worker with an easy laugh. She was athletic, a 5-time FSIN soccer champion. She is loved and missed. She was a young woman of 31, with her whole life ahead of her. But it would seem that sometime around July 10, 2018, her future would be cut short. Where is Ashley Morin?

Friday, July 10, 2018. It’s been a little over two years and counting since we can last trace her movements. That’s a long time to go without your loved one, without answers, and without justice.

One of her last know sightings was on July 10, 2018, at approximately 9:30 pm CST on the corner of 96th street and 16th avenue in North Battleford, SK. A two-toned panel van, with no rear windows, was seen at that intersection around the same time Ashley was seen there. This intersection is in the west end of North Battleford, directly across from a football field at the rear of John Paul II High School and adjacent to an elementary school. This area is mainly residential and was close to where Ashley lived.

Ashley last spoke to her mother on July 1, and her last confirmed communication with family was on the 10th of that same month. It is not in her normal behaviour to go through long periods without speaking to any members of her family or friend circle. Once reported missing, law enforcement labelled her missing person case as suspicious.
Shortly after this, the RCMP North Major Crime Unit joined the investigation along with the local RCMP office.

In 2019, on the 1st anniversary of Ashley’s disappearance, the RCMP released a press statement. During this press statement, they released a grainy image of this van. As described, the van is a panel commercial type van, with no rear windows, and was two-toned, possibly black and white. The lighter colour or white was at the top, and the darker tone of black was at the bottom. Law enforcement is asking the public’s assistants in identifying the owners, any occupants that would have been driving in the van on July 10, 2018, or names of anyone who would have had access to a van matching this description during that time as they could possibly have invaluable information in the case of Ashley’s disappearance.
RCMP Media relations officer, Jessica Cantos, stated shortly after this press release, “We have received many tips from members of the public since we issued our release on the one-year anniversary of Ashley’s disappearance. Saskatchewan RCMP, along with the major crime unit, continues to investigate the disappearance of Ashley. Based on the tips, witness statements, and the investigation to-date, the RCMP believes that Ashley is a victim of a homicide.”

The RCMP has confirmed that there has been no social media, mobile phone or bank activity linked to Ashley since her disappearance.
Additionally, they indicated that some information was received, either through tips or through witness statements, was that she was travelling from North Battleford, SK westward towards Lloydminster or Edmonton, AB. Lloydminster is approximately 140 km (87 miles) away, and Edmonton is about 390 km (242 miles). However, they were not able to confirm this information.

This statement, along with the release of the photo of a van of interest, was shocking for the family. And, although they were prepared for a press release from the RCMP, they were not ready for the hope of a safe return to be ripped from their hearts without warning. The family was not contacted or told about the belief of homicide in the disappearance of their loved one. Prominent Cree elder and grandfather of the victim, Eugene Arcand, has accused the local RCMP of failing the family of missing woman Ashley Morin, saying that they are “ass-covering” on the investigation. He advised that Ashley’s family learned on social media, not from law enforcement directly, that the RCMP had classified Ashley’s disappearance as a homicide and were not told that the RCMP had a photo of a suspicious van suspected to be involved in her disappearance. According to an email sent to the CBC in 2019, they indicated “Informing the family of the progress of the investigation into the disappearance of their loved one is done as the investigation progresses.” However, they were not advised of Ashley’s missing case being classified as a homicide, nor if the suspected vehicle involved in her disappearance. That they learned through social media.
The family continues in their fight to raise awareness for Ashley, ensuring that her name stays in the media and her story on the lips or in the ears of those that will listen.

Episode #32 of the podcast has the audio recording of the interview conducted by Occultae Veritatis Podcast with Janine Morin, Ashley’s sister and Krista Fox, Family media contact. I encourage you to go and listen and hear the story from the family that is actively looking for Ashley, the struggle to get help from their local police, and what you can do to help bring Ashley Morin home.

“Mum’s the word” for law enforcement with regards to the current investigation and the information that led them to believe that Ashley has been the victim of a homicide.

Police will not confirm whether there are any specific suspects in Ashley’s disappearance and probable murder.

Ashley was 31 years old when she went missing, she is described as 5’2, weighing 110 lbs. She has long black hair and brown eyes. She would sometimes wear glasses. She was last seen wearing grey sweat pants, a black t-shirt with white writing on it, a black hat and sunglasses. Her disappearance was marked as suspicious as she would not go a long time without reaching out or speaking to friends or family.

Just a few months after Ashley disappeared, another local woman, Tiki Brook-Lyn Laverdiere also went missing. Around this time, Maclean’s magazine published an article stating that, based on size, North Battleford to be ‘Canada’s most dangerous place, reporting a very high crime rate as evidence.

To this, the mayor responded:
“The reality is we require the provincial and federal levels of government to take notice of this and align their efforts with ours. This needs to be a partnership. This can’t be something the governments do in silos, and we need to be working together. If we can do that, then sometime in the future, we can see some great results.”

However, city planner Jim Puffait doesn’t necessarily agree with Maclean’s assessment because their statistics do not incorporate the many transients, which would increase the population, if counted, by an additional 14,000, and would push the rate lower and take them out of the #1 spot for crime.

Ashley’s family and friends have just completed their second march to bring awareness to Ashley’s case, marching 140 km from Saskatoon police station to North Battleford, taking approximately 3 days to walk this distance. A group of people clad in red, a symbol of the missing and murdered indigenous women and girls, after the red dress project by Jaime Black, as red is the only colour the spirits can see.

The Saskatoon police have escorted the marchers to the edge of their city boarder. The local RCMP have made no efforts to support or escort marchers. The RCMP stated that they are using their resources investigating the disappearance of the young woman instead of joining the march.

Dozens of searches in the area have taken place, with no results.

The most recent search took place over 3 days from the 24th to July 26 and was organized by the Grand Council, the Saskatchewan First Nations Emergency Management. The RCMP and Prince Albert Grand Council search and rescue team, as well as other agencies, joined Ashley’s family in the search help along the banks of the Saskatchewan river. The family gets many tips that point them to the riverbank near Finlayson Island in North Battleford. One of those who participated in the search was deputy police chief Jason Stonechild from Prince Albert, doing his part to take some of the weight off the shoulders of the family, happily participating to raise awareness to Ashley’s case and answering the calls to action from the Missing and Murdered Indigenous Women and Girls inquiry to build understanding and respect between law enforcement and indigenous people.

The RCMP’s major crime unit is asking for people to come forward that have information about Ashley’s activities or who she may have been in contact with or associated with between July 6 and July 10 2018. As well as information on the owner or anyone who would have had access to a van similar to the one described. Crime Stoppers: 1-800-222-8477.